I’ve been an Open Source advocate and evangelist for the better part of the last 20 years. I’ve started my days with Slackware Linux, moved to RedHat, then to Mandrake, then over to CentOS – which is now my choice of OS for the desktop and server. During these 20 years, I’ve seen various project come and go, companies rise and fall, technologies adopted and abandoned. A recent post on facebook from Dovid Bender got me thinking about this issue again: 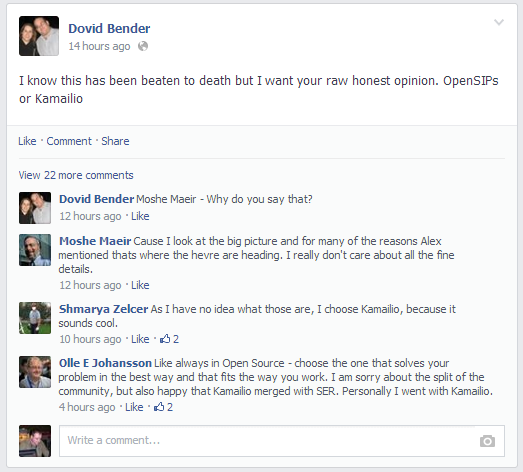 Now, let’s put aside the grand discussion on the way the OpenSIPS project came about, their domain hijacking tactics, their overall confusion in the initial stages in regards to the difference between OpenSIP and OpenSER/Kamailio – let’s just put these apart for a second. Honestly, I can’t really tell the two apart, they use the same general configuration syntax and in most cases (over 95%), you can use the same configuration on both and it would work exactly the same. So, what does it boils down to? it boils down to Ego. Do I want to be considered traditional and stable and work with Kamailio, or would I like to be perceived as cutting-edge and work with OpenSIPS (although that isn’t true at all).

The same issue can be attributed to the ever growing battle between Asterisk and FreeSWITCH. Now, each one was built for a totally different class of operation (although, Asterisk 12 does introduce new functionality that makes it shine much harder than FreeSWITCH). People repeat the old “You’re melting our switches” FreeSWITCH urban myth, but again, I still hadn’t seen one installation that truly did everything with FreeSWITCH and is truly focused on using FreeSWITCH to leverage something else. So, if FreeSWITCH is only used as a media/application server, then I see no difference between it and Asterisk in that regard. More than that, if the added value of using FreeSWITCH is just a mere 5-10% increase in performance, it just isn’t worth my time to do so. Now, I’ve used FreeSWITCH in the past, don’t get me wrong – it’s a wonderful tool in that respect, and for Class-4 switching it is a massive tool. But when it comes to Class-5 and high-level services, sorry to say, Asterisk will always be my choice – not because it is better, not because it’s support and community is far more experienced, not because it out-performs FreeSWITCH – it will always be due to one simple reason – it is the one I know will require the less amount of ongoing support and maintenance and will bring me to my target much faster than FreeSWITCH.

A few weeks ago, I put the following status on facebook: 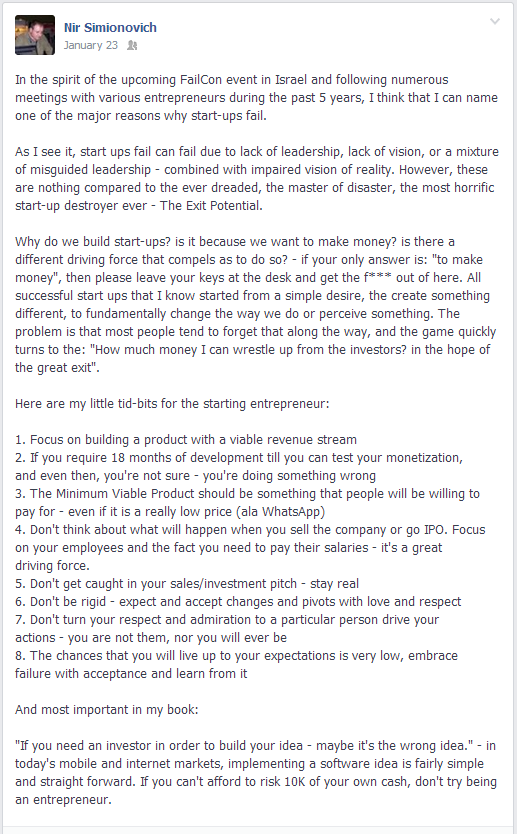 Now, the two have direct correlation – When a CTO/VP R&D isn’t a telecom’s guy – and he takes decisions for development of the platform – simply based upon the writings of others on the net – which is purely influenced by a religious war – he is incapable of making the right decision. Take Jajah for example, when Roman and Daniel started Jajah, they only tool they used back then with Asterisk@Home – because that’s what they had. When the company grew, they could have easily moved to new grounds – FreeSWITCH was already around. Why didn’t they? Why did Jajah remain with Asterisk – adding OpenSER/Kamailio into the mix later on? Why didn’t they move to a new platform? was it because they have loads of code developed? companies throw away code like dirty socks every other day – they had the resources. Fact remains, the service was alive for a long time, the company was bought out by Telefonica Digital at a price of $215 Million.

On the other hand, let’s take a company like Truphone (and pardon me James, I know you’re gonna kick my ass next time we meet). Truphone had changed technologies over the course of times many times. Each time, abandoning the previous tech and going for a new one. So did companies like Rebtel, Spikko, Skuku and others. Amazingly enough, none of them could be considered a massive success. Word on the market currently says that Truphone is looking for additional investors, as their existing ones aren’t willing to put in more cash. Spikko’s original model is totally gone and the company literally caved-in on itself – and same applies to many others.

So, what does it boil down to? is Asterisk better? is OpenSIPS better? – these are the wrong questions. The questions should be:

When it comes to choosing between Asterisk and FreeSWITCH, here are my reasons for choosing Asterisk over FreeSwtich any day: