Apparently, according to the BBC, the most spoken language in Israel is most probably Arabic. Well, at least judging from their website. I was browsing the web for some information about the “Doctor Who” TV series (if you have no idea what I’m talking about – shame on you!). As it is a BBC series, I pointed my browser to the BBC website, to be greeted with the following: 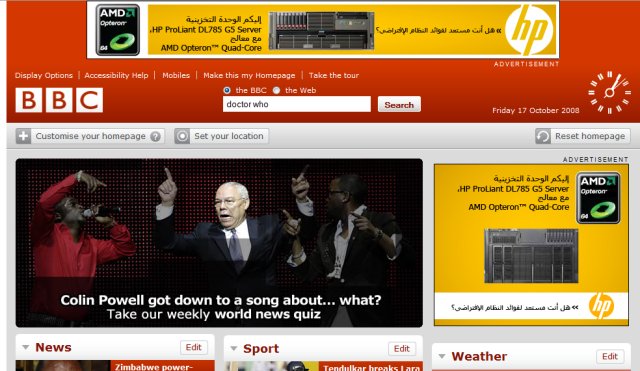 While I’m not offended at all (really I’m not), I do pitty the people at the BBC that can’t seem to get their GeoIP working properly, and mistake Israel for another Middle Eastern country. It is true that there are many Arabic speaking residents and citizens in Israel, but still, the major language here is Hebrew.

Clicking the banner actually brought me to an HP page, fully in English, fully targeted to this region.

In the words of a great man: “Not bad – but not perfect”.